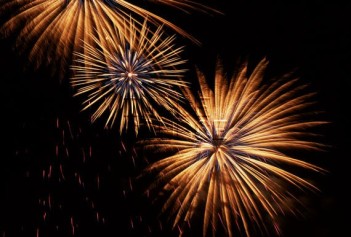 When I was a kid growing up in New Hampshire, it wasn’t unheard of for my friends and I to get a hold of firecrackers or roman candles and explore their pyrotechnic greatness in remote, wooded areas. In retrospect, these adventures probably weren’t a great idea for a number of reasons (but watching dead stumps stuffed with firecrackers explode was quite a fulfilling experience). If I had grown up in New York, I would have been deprived of these fond memories. That’s because fireworks have been illegal in New York since about 1940 (except for public displays by professionals). However, in 2015 New York law was amended to allow the sale and use of a certain subtype of fireworks known as “sparkling devices.”

While you still shouldn’t see people shooting off roman candles or tossing firecrackers (since they aren’t “sparkling devices”), you’ll see a lot more than you would have prior to 2015. Spanning over two pages in length, the definition of “sparking devices” is set forth at Part 225 of Title 9 of the New York Codes, Rules and Regulations.  Sparking devices are divided into two categories – “ground-based or hand held devices” as well as “novelties.”

“Ground-based or hand-held devices” are defined as those devices which produce a shower of colored sparks as their primary effect, and which may also include a colored flame, an “audible crackling effect” or whistling, and smoke. They cannot rise into the air, fire projectiles into the air and cannot explode. “Novelties” are defined as those devices which are not regulated as “explosives” and are generally limited to devices such as “party poppers,” “snappers” and the like. While the definition of sparking devices seems fairly narrow, you’ll soon see that fireworks vendors have no problem filling up large (obnoxiously colored) tents full of an impressive variety of of pyrotechnic goodies.

Sparking devices may be sold in New York only on specified dates during the Independence Day and New Year seasons. Specifically, sale dates are limited as follows: from June 20th to July 5th (though permanent and specialty retailers may begin sales on June 1st), and from December 26th to January 2nd.

Whether you are able to find fireworks for sale nearby depends on which county you are shopping in. That’s because the law is not a blanket authorization for the sale of approved fireworks anywhere New York. Instead, the law permits each individual county to decide, via local legislation, whether the sale of sparkling devices will be allowed within its jurisdiction.  By way of example, in the Rochester area, fireworks may be sold in Wayne County and Ontario County, but are not authorized for sale in Monroe County. A full listing of counties which have authorized the sale of fireworks can be found here:  http://troopers.ny.gov/Publications/Crime_Prevention/fireworks_law_changes.pdf. Notably, the sale of any fireworks is completely banned in New York City.

Fireworks vendors are required to be certified by New York State. While local municipalities such as villages, towns and cities may not regulate fireworks (since New York regulates them, as described above), some choose to regulate the zoning and land use aspect of the temporary fireworks sales tents by requiring site plan review. Since many of these temporary tents are quite large and are placed in parking lots of existing, busy and commercialized sites, there are a few important factors which the local planning review agency should consider, including: traffic safety, vehicle and pedestrian ingress and egress, sufficient parking and sufficient building separation. Your local building inspector should also review the plans for safety, ensuring that the operation is compliant with the New York Fire Code.

As authorizing counties “explode” with the proliferation of temporary fireworks sales tents, may you go forth with your newfound knowledge of New York fireworks regulations and have a safe and enjoyable Fourth of July celebration!